Shunned as fringers from the moment they arrived in Hope, the DeVrit family became increasingly bitter and isolated. But Lana’s future was reforged on the night Sheriff Wade sacrificed part of himself to keep her safe. The townspeople now consider Lana to be the principal authority at the Sheriff’s Office, but so long as Wade holds the badge she will stand by his side, regardless of the severity of the situation, out of both loyalty and her own sheer bloody-mindedness. 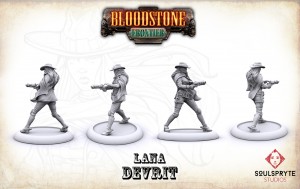