Joseph Wade has been the Sheriff of Hope for as long as most can recall, although few remember him from a time before the brace and the bottle had taken their toll. Once held in the highest esteem, his personal battles have dulled the senses, but, when sober, his continued concepts of justice and fair play leave a strong-enough impression for his occasional transgressions to be swept beneath the straw. 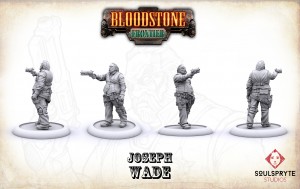