Hope attracts the lucky and the lost, the ragged and the rich; it’s a marriage that often ends in strays. Eccho was one such stray until his keen senses led him to Wade, who immediately recognised a kindred spirit. Eccho’s loyalty to Wade is as strong now as it’s ever been, despite the damage he’s taken in the line of duty. For his part, Wade always ensures that any patching up his friend needs is paid for before other necessities are secured. 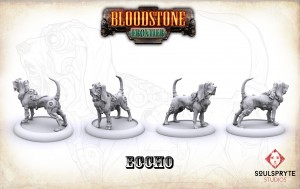